Paradigm Lost has an elaborate stage show and only plays live in rare major or special events.  Electronic/dubstep elements are fused with live drums, vocals, and live guitar and bass. Other instruments used live are a DJ rig, theremin, and Moog. A large stage is necessary for their normal live set.

If Bjork and Trent Reznor (NIN) had a baby boy and it was raised with 90's angst in a household with grandpa Leonard Cohen, uncle Marilyn Manson, and stepbro Sonny Moore (Skrillex), it might make music that somewhat resembles this stuff Paradigm Lost has made since discovering the internet and buying the web domain name paradigmlost.com the first time in 1994.

Paradigm Lost makes mostly electronica songs but the songs range from singer-songwriter style (Stick to the Story) to ambient industrial style (Come In) with some dub step breakdowns here and there (One Toe Over The Line about halfway through) and industrial-style covers (Mad World). These songs are all collaborative creative ventures produced by Paradigm Lost and his friends that are based in his recording studio - SER Soundworks - in Chandler, AZ.

Paradigm Lost has created 3 albums, the first two of which (Progressive Revelation and Human) were distributed by Orchard/EMI in the mid-late 90's and on the very first unrolling of iTunes sometime back in the early 2000's (both albums are still available). This most recent album Crumblenomix in 2014, is not-yet mass produced and is mostly a collaboration with songwriter/guitarist Michael Saul, and featuring anyone else that wanted to play something on the project. 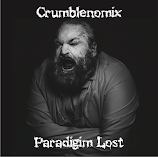 All Rights for images on this site reserved to Paradigm Lost, Shane Matsumoto or iMustBeDead unless otherwise stated.